New York was great.  The kids are at a fun age so we're able to do lots stuff now when we get places.  We made it to lunch over at Walter's....and as usual it was so good.  Then we took a little trip down memory lane and drove by the house I grew up in and then headed out to Manor Park and the kids climbed on all of the rocks that I climbed on as a kid.  Then it was off to get some ice cream in town and get some back to school shopping done.  Everyone got a new back to school outfit.  Everybody is starting something new next week so we're trying to get really excited about it.  Javi is starting kindergarten, Ale is starting at the Salt-Box School 5 days a week and Clarita is going to the Bunny Den at the Family School twice a week.  The plan is to have some very productive Tuesdays and Thursdays but we'll see what happens when it comes down to reality.
I'm trying to get a firing done before Labor Day but it's starting to look like the Wednesday after is more likely.  Today is bisque day and glaze inventory day.  I know I need to mix up a few glazes and I want to try a blue celadon on those new platters.  Well, they were new when I made them about a month ago.  Maybe I'll even take a look and see if I need any glaze ingredients before I start mixing so the round of phone calls looking for a spoonful of copper isn't necessary this time.
Evangelina's mother is coming in today from Houston which is great because the kids haven't gotten to see her since May.  I'm sure a trip to Fort Hill is in the works as a field trip.
Well...off to figure out what glazing needs to be done.  It's also time to stare at that big planter I made over a year ago and try to remember how I was going to glaze it.
Posted by Keith at 9:48 AM 2 comments:

We're off to New York.
It's my Great Aunt Shirley's 90th birthday party and we can't miss that.
We'll be down until Wednesday so I'll have even less pottery stuff to blog about.  The shop is going to be closed until Thursday for our last blast during Labor Day Weekend.  Thursday is load a bisque day and then hopefully fire a gas-kiln on Saturday.
If we do anything cool in NY I'll post about it.  It will probably be food related as I'll be re-visiting all of my favorite places from growing up.  I can't wait to take my kid's to Sal's Pizza and Walter's Hot Dog Stand.  I don't think they're ready for Pat's Hubba Hubba yet.
Posted by Keith at 7:28 AM No comments:

Pots from the collection

So...I haven't posted in so long I have nothing to really say.  I haven't gotten anything in the studio recently.  We've just been enjoying the past couple of weeks.  My brother and sister came up from NY with their spouses and kids so we had a great weekend with 7 grandkids playing together down the road at my parent's house.  It was the first time we have had everyone together since the two newest babies came around this past spring.  It was very strange....everywhere you looked there was a pair of kids doing something.
To at least give something interesting to this post...here are a few pots from our house.  I guess I'll follow what is going on around the pottery blogosphere and open up the comments for the answer of whose pots are these?  And...why don't we just combine this with all of the political blogs I read as well and open up the comment thread to include any VP predictions.  Sounds like we'll know Obama's pick this weekend and McCain's right after the Democratic Convention.  Enough politics.  Back to pottery....enjoy. 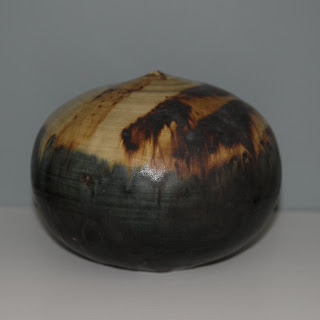 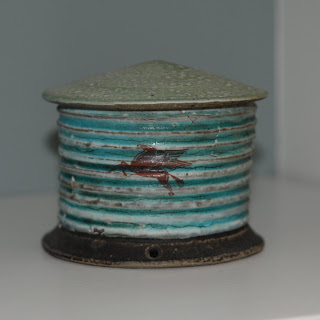 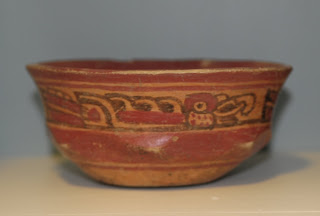 Music night tonight here in the port.  If you're on Cape come check it out.  It's the last one of the summer and we have a great band out front as well as some pots on sale inside the gallery.
Posted by Keith at 3:38 PM 6 comments:

My wife's aunt and uncle are up for the weekend.  This means two things...my kids get to play with their "big" cousin Eduardo who is 14.  But what may be even better is the fact that we always make a paella when Tia Maria Elena is in town.  Unfortunately for her, I have cooked a few paellas this year so I think I know what I'm doing...and if you couple that with my control freak nature of cooking we had a little battle going outside by the paella.  But, I think we ended up working together well enough to make a great paella.
Here's a little step by step of the paella.
First, grab some propane and connect it to the paella burner stand that your wife's Salvadoran grandmother has somehow brought back from Spain.  (They're also available online at a number of places.) 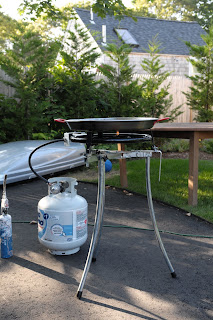 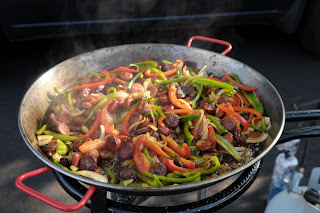 When the veggies are nice and soft, saute the rice for a little bit.  (I used traditional spanish paella rice...it's similar to arborio rice for risotto.  This was our first little disagreement.  Maria Elena and her mother swear by Uncle Ben's but I'm more of a traditionalist.  Lo siento Tio Benjamin!)
After you saute whatever rice you choose for about 1-2 minutes add the stock.  I was lucky because Maria Elena had spent the entire day making a stock. 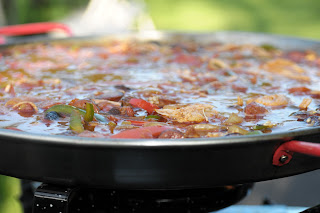 After the rice has had 10-15 minutes of cooking time add the seafood.  Tonight we had scallops, shrimp and clams but feel free to put in whatever you like and can find nice and fresh.  We're definitely lucky out here on the Cape.  We get our seafood at Chatham Fish & Lobster. 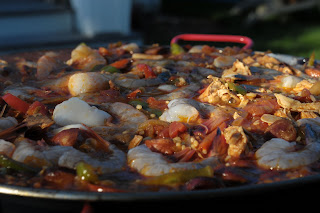 Alejandra was crowned as the new paella princess tonight.  Her new responsibilities included serving the paella.....and since she walked downstairs this morning with her crown and earrings on I assume she also had to sleep in the outfit. 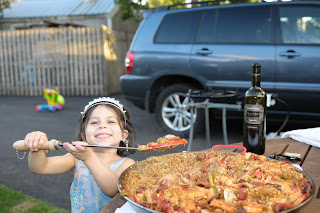 I can only upload 5 pics at a time so you'll just have to believe me that the next step is to sit down with friends and family, drink wine, eat paella and just have a wonderful evening in the backyard.
Posted by Keith at 8:36 AM 4 comments: 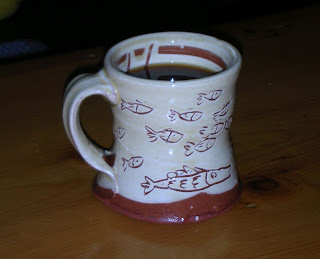 Apologies to Michael Kline for ripping off the "Coffee Break" feature...but....since this was my first cup of coffee for the day it's not truly a break.
I got this cup in the mail last week...filled it immediately and I'm just now getting around to getting the pic up on the blog.
For those that haven't seen it yet, Ron has a new Etsy store where you can get your own freshly made earthenware shipped directly to your door.  Sorry, you must provide the coffee upon arrival.  You can find the store directly from Ron's blog.
Buy Pots!  Buy Pots Online!  Buy from potters you know...buy from those you don't but like what you see of their work online.  I had never seen Ron's pots until I started blogging.  I'm glad that his mug has joined my morning rotation in the kitchen.  The more pots everyone buys online....from me, from Ron from everyone, the more pots we'll see online and the more pots will get around the country as well.
Posted by Keith at 8:24 AM 5 comments:

So the post below from Monday was supposed to be titled "Gone Fishing" but I forgot to put that in the email subject when I emailed the post in from the boat.  Blogger is pretty cool in that I can email a post in as long as my phone has service.
We went fishing over near Monomoy Island off of Chatham.  My friend Pete has a boat that he finally got in the water.  We didn't catch anything but we were right in a pile of bait fish...unfortunately, the seals that live on Monomoy took care of that so that kept the bigger striped bass away.  Still, a bad day of fishing is a full day on a boat out on the water and I can't complain about that.  Next week I'm hoping to catch a ride on my friend Tony's boat and we'll head on out about 25 miles and try to catch some Tuna.  That is going to be fun...I've never gone out for tuna before.
Back to pots....
Here are some platters and bowls that I decorated for either a reduction or a salt/soda wood kiln.  Depending on my timing they'll either go in my reduction kiln here or wait until fall when my friend Michael McCarthy is planning on building his new woodkiln.  Perhaps they'll make it in his inaugural firing.
This one is about a 6 pound platter: 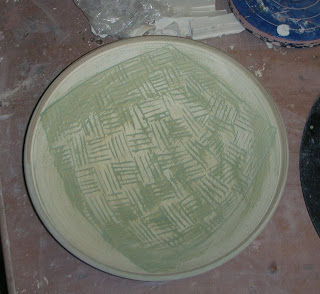 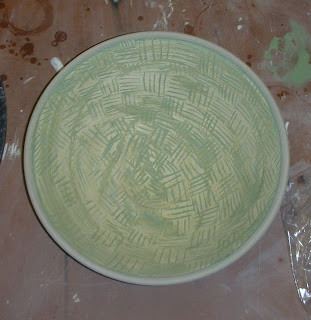 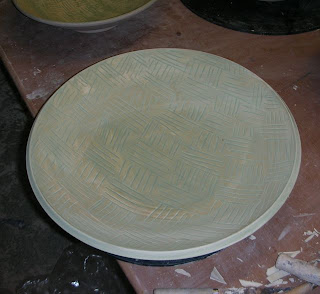 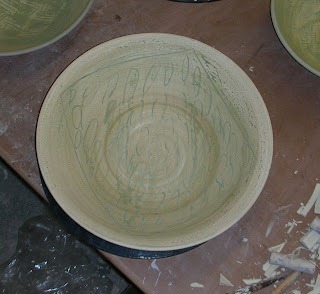 I'm hoping that this decoration works well under my reduction glazes.  If it does I may have finally figured out how to make my work and not have to figure out ahead of time which kiln it's for...except of course, the earthenware.
Posted by Keith at 11:10 AM 6 comments: 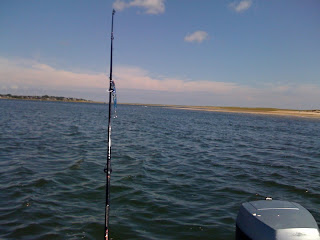 Here's my first video.
I thought I would do a quick(time) movie of me putting the two sections of a pitcher together.  It turned out to be a little longer than I had planned.  I also probably went a little overboard on the transitions and titles using iMovie.
I hope it's not too big a file and it doesn't clog up anyone's intertubes.
I'll make the next video a little shorter.
Posted by Keith at 1:26 PM 4 comments: